You are here: Home » Blog » Calculation of the Bending Force During Free Bending of Sheet Metal Bending Machine

l - the bending length of the sheet, m;

V - the width of the lower die opening, mm;

The bending force parameter table recommended by the manufacturer is also calculated according to the above formula.

Figure 1 is a schematic diagram of the work during sheet bending. The following describes the derivation process of the bending force calculation formula and two additional parameter conditions. First, there are such recommendations in the product manual. In free bending, the selected lower die opening width V is 8 to 10 times the sheet thickness S. Here we take the aspect ratio . 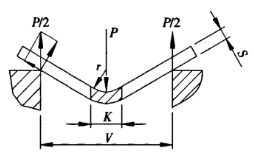 Second, the manufacturer lists the corresponding values of the die width V and the inner diameter r of the bending workpiece on the bending force parameter table. Generally r=(0.16~0.17)V. Here, the diameter-to-width ratio

The bending moment on the cross-section of the deformation zone is:

The bending moment generated by the bending force of the machine in the deformation zone is (see Figure 1):

When using general-purpose molds for free bending on a bending machine, most of the sheet metal is bent 90°. As shown in Figure 3. K is:

Substituting K into equation (1), we get:

The tensile strength of ordinary materials σb=450N/mm2, substituting formula (2) into:

It can be seen from the derivation process that when using equation (2) or equation (3) to calculate the bending force, the two additional parameter conditions mentioned above need to be met. That is, the aspect ratio 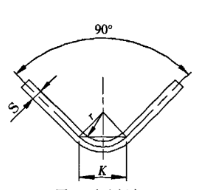 Due to design or process requirements, it is sometimes difficult to meet the above two additional requirements at the same time. At this time, the recommended calculation formula should not be used to calculate the bending force but should be carried out according to the following steps.

(1) According to the plate thickness S, the bending radius r, and the lower die opening V, the width to thickness ratio and the diameter to width ratio are respectively calculated.

In the calculation process, the difference of the bending radius and the change of the corresponding deformation zone have been considered. The bending force calculated from this is more accurate and reliable than the result calculated by the usually recommended formula. Now give an example to illustrate, as shown in Figure 4. 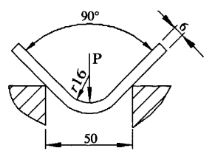 Secondly, calculate the projection width of the deformation zone:

Finally, use equation (1) to find the bending force:

If the usual recommended formula is used to calculate the bending force:

= 1.5, it can be seen that the difference between the two is 1.5 times. The reason for this error is that the bending radius in this example is relatively large, and the corresponding deformation area is increased, so a greater bending force is required during bending. In this example, the diameter-to-width ratio=0.32, which has exceeded the additional conditions of the parameters introduced above. It is obviously inappropriate to use the usually recommended formula to calculate the bending force. You can see the advantages of the new calculation method from this example.

The steps and formulas for calculating the bending force introduced here are not only applicable to the angle bending of sheet metal but also applicable to the arc bending (strictly speaking, it should be called the angle bending with an extra-large bending radius). It should be pointed out that the shape of the mold is special when the sheet is bent into an arc shape. When calculating the projection of the deformation zone, it must be calculated according to the technological parameters set in the technological process, which cannot be expressed by a simple formula.

When designing an arc-shaped mold, using the method introduced in this article to calculate the bending force, satisfactory results can be obtained.