You are here: Home » Blog » What is a Hydraulic Press Machine - Part I

What is a Hydraulic Press Machine - Part I

The working principle of hydraulic press machine. The areas of the large and small plungers are S2 and S1, and the acting force on the plunger is F2 and F1, respectively. According to the Pascal principle, the pressure of the sealed liquid is equal everywhere, that is, F2/S2=F1/S1=p; F2=F1(S2/S1). This represents the gain effect of hydraulic pressure. Like mechanical gain, the force increases, but the work does not gain. Therefore, the moving distance of the large plunger is S1/S2 times the moving distance of the small plunger. 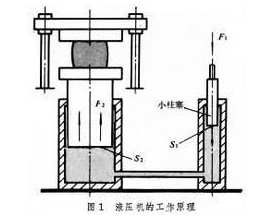 The basic principle is that the oil pump delivers hydraulic oil to the integrated plug-in valve block, and distributes the hydraulic oil to the upper or lower chamber of the cylinder through various check valves and overflow valves. Under the action of high-pressure oil, the cylinder moves. A industrial hydraulic press machine is a device that uses liquid to transmit pressure. The liquid follows the Pascal's law when transmitting pressure in a closed container.

The driving system of the hydraulic machine mainly has two types of pump direct drive and pump-accumulator drive.

The pump of this drive system provides high-pressure working fluid to the hydraulic cylinder, the distribution valve is used to change the direction of liquid supply, and the overflow valve is used to adjust the limited pressure of the system and at the same time play a safety overflow role. This driving system has few links and a simple structure, and the pressure can be automatically increased or decreased according to the required working force, which reduces the power consumption. But the capacity of the pump and its driving motor must be determined by the maximum working force and the maximum working speed of the hydraulic press. This type of drive system is mostly used in small and medium-sized hydraulic presses, and it is also a large (such as 120,000 kN) free forging hydraulic press directly driven by a pump.

There is one or a group of accumulators in this drive system. When there is a surplus of high-pressure working fluid supplied by the pump, it is stored by the accumulator; and when the supply quantity is not enough, it is replenished by the accumulator. Using this system, the capacity of the pump and motor can be selected according to the average amount of high-pressure working fluid, but because the pressure of the working fluid is constant, the power consumption is large, and the system has many links and the structure is relatively complicated. This type of drive system is mostly used for large hydraulic machines, or a set of drive systems to drive several hydraulic machines.

In the vertical four-column free-forging hydraulic press machine for sale with upper drive, the cylinder is fixed in the upper beam, the plunger is rigidly connected with the movable beam, and the movable beam is guided by the vertical column and moves up and down under the pressure of the working fluid. There is a worktable that can move back and forth on the beam. Install an anvil and a lower anvil under the movable beam and on the worktable respectively. The working force is borne by the frame composed of upper and lower beams and columns. Large and medium-sized free-forging hydraulic presses driven by pump-accumulators often use three working cylinders to obtain a three-stage working force. Outside the working cylinder, there is a balance cylinder and a return cylinder which apply upward force. 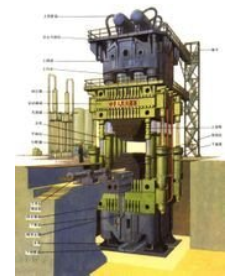